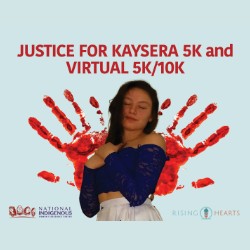 Run/walk in person on September 17th beginning at 8AM. You will also be able to upload your finish time online along with up to 5 photos you took along your route or post-run!

Registration and check-in is at The GasCap Basketball Court Parking Lot
Hurry, register 3 weeks in advance to get a personalized Race Number! 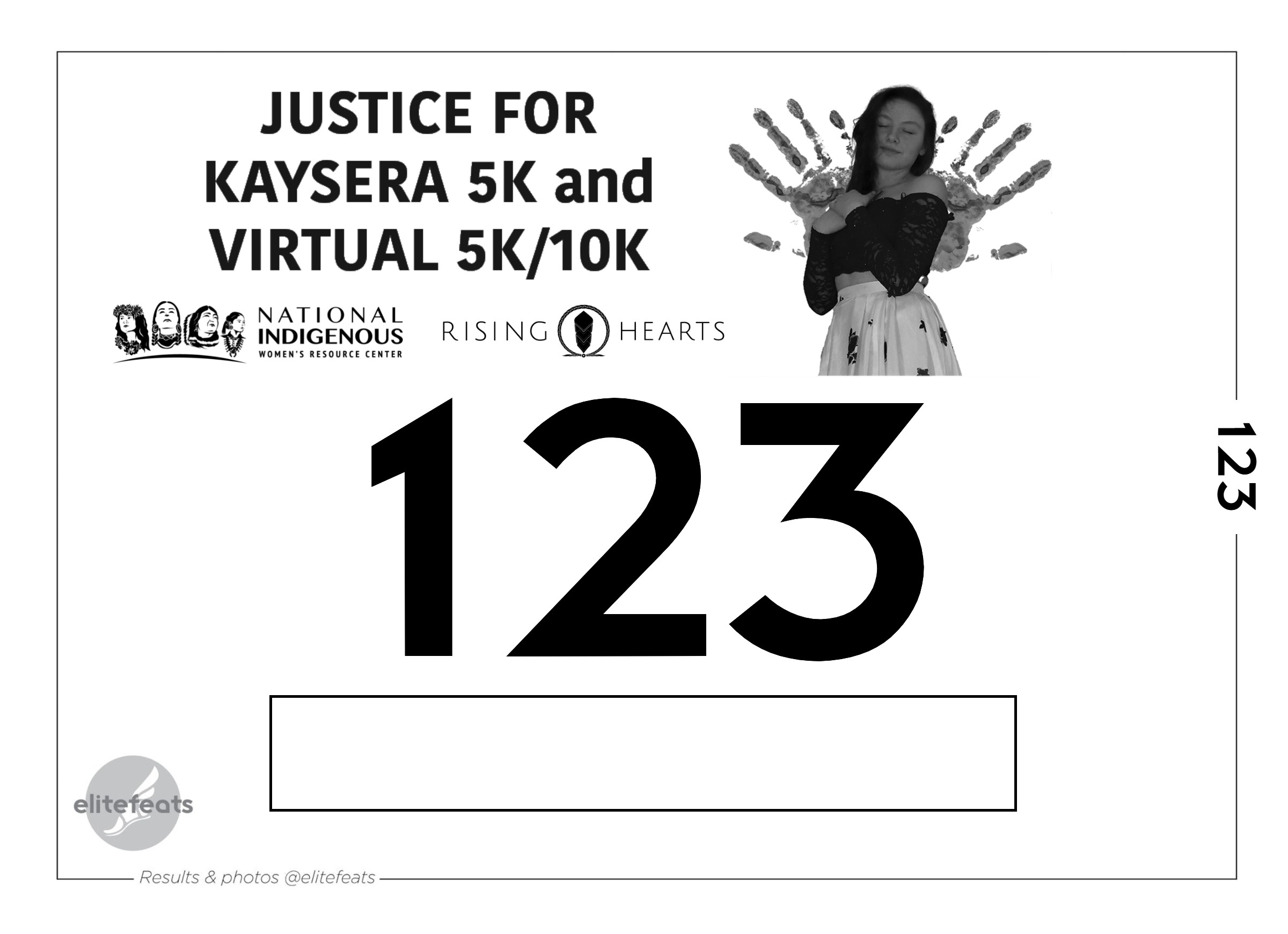 TRACKING YOUR DISTANCE
4 Laps to one Mile on a Track
Treadmill
MapMyRun.com
Find a Certified USATF Course
Some events display course maps at elitefeats.com
Many parks have measured 'fitness' trails open to the public
Download free app Strava & hit 'Record'

HOW TO POST TIMES
1. Cover ground whenever & wherever you'd like!
2. On Start Date visit elitefeats.com/Results - search this event.
3. Search your name - click Update.
4. Enter your time.
5. Optional upload up to 5 photos.

EARLY REGISTRANTS (before start day) can start posting times ON start day!
LATE REGISTRANTS (after start day) allow up to 24 hours to post times.
BIB MAILING begins Monday prior to start day. If you register after this, please allow 3-5 business days to receive.

You don't need the bib to participate, it's a keepsake!

See the Press Release for the Event

PRESS RELEASE ABOUT THE EVENT

In August 2019, 18-year-old Kaysera Stops Pretty Places was murdered in Big Horn County, Montana. Three years have passed since her murder, and the FBI, Big Horn County Sheriff’s Office, and the Montana Department of Justice have done nothing to undertake a criminal investigation. This miscarriage of justice cannot stand. Law enforcement must be held accountable so we can finally bring #JusticeForKaysera.

Kaysera’s family, in collaboration with the NIWRC, Sovereign Bodies Institute, Rising Hearts, Elite Feats, and Waking Women Healing Institute will be hosting events in Kaysera’s name beginning on August 24, the day Kaysera went missing, through August 29 (the day her body was found), and ending on September 11, the day Kaysera’s family was notified her body had been found. Please join us in the fight to bring #JusticeforKaysera. A run will be held this year on September 17 to raise awareness to the campaign to convince law enforcement to do the right thing and investigate her homicide.

Individuals can support the family’s fight for justice by showing up in person at a rally or vigil held in Kaysera’s honor. For individuals who cannot be in Hardin, or have concerns about appearing in public due to COVID, there are several ways in which individuals can show their support digitally, no matter where they are. For instance, the National Indigenous Women’s Resource Center is hosting two Twitter storms, where individuals can speak up and demand justice for Kaysera online, on Twitter. Dr. Grace Bulltail will host events via Facebook Live, and the Waking Women Healing Institute’s event will be virtual as well. A schedule of all events is provided below.

The family also encourages individuals to send letters or any form of written communication to the elected and appointed leaders in both the Montana and United States governments who have failed Kaysera. Three years is inexcusable. Both the federal government and the United States have had every opportunity to undertake a legitimate criminal investigation, and they have failed to do so.

“Kaysera was murdered three years ago. Still, to this day, both federal and state law enforcement have refused to simply interview family members and friends who have information related to her homicide and possible suspects,” states Dr. Grace Bulltail, Kaysera’s aunt. “And they won’t, unless American citizens, both here and in Montana, demand that they treat Kaysera’s homicide as seriously as they treat the homicides of white women and girls.”

“The number of homicides of Native people in Big Horn County is off the charts. Nearly all of them have uninvestigated,” states Yolanda Fraser, Kaysera’s grandmother and legal guardian. “As we decide who should hold positions of power in Big Horn County, I encourage all voters to vote for leaders who will do something to address the crisis of Murdered and Missing Persons in Big Horn Country—instead of ignoring it. Our families deserve justice.”

“The United States has failed Kaysera’s family, and all of the MMIP families in Montana,” states Mary Kathryn Nagle. “The failure of the FBI and other federal agencies to investigate the countless homicides of Native people in Montana is discriminatory. We cannot allow it to continue. We hope you will join the family in demanding Justice for Kaysera.”

A full listing of planned events can be found below.

Please also sign the petition demanding #JusticeForKaysera, which can be found here.

August 17-21: We invite anyone interested to visit a memorial for Kaysera at our family campsite at Crow Fair 8/17-8/21.

August 28: Join Waking Women Healing Institute for a Facebook live event with a panel on MMIP mapping and what has, and has not, been done with Kaysera’s case. Panel starts at 12pm CST/11am MST.

August 29: Join Kaysera’s family for an in person rally in front of the Courthouse in Hardin, Montana. The rally will begin at 11am MST.

August 31: Everyone is encouraged to write a letter to Governor Gianforte. Draft sample letters can be found here.

Sept 1: We encourage everyone to sign the Change.org petition here.

Sept 2: Everyone is encouraged to write a letter to Senator Tester. Draft sample letters can be found here.

Sept 3: Everyone is encouraged to write a letter to Senator Daines. Draft sample letters can be found here.

Sept 4: Everyone is encouraged to write a letter to MT Attorney General Austin Knudsen. Draft sample letters can be found here.

Sept 6: Everyone is encouraged to write a letter to Sheriff Big Hair. Draft sample letters can be found here.

Sept 7: Everyone is encouraged to write a letter to Secretary Deb Haaland. Draft sample letters can be found here.

Sept 8: Everyone is encouraged to sign-up for the September 17 run on this page.

Sept 9: Everyone is encouraged to write a letter to Associate Attorney General Vanita Gupta. Draft sample letters can be found here.

Sept 10: Everyone is encouraged to write a letter to the FBI. Draft sample letters can be found here.

Sept 17: Annual #JUSTICEFORKAYSERA RUN – the run will begin at 8am MST at Crow Agency, Montana. There is an option for folks to participate through a virtual run as well. Register today.